Nerf, pretty sure you’ve heard of it right? It’s the brand which surrounds us during our childhood and dominates all other toy gun markets. Till today, Nerf guns are collected by all ages, children and even adults.

But undoubtedly, most of us who collect Nerf Guns tend to want to play with them. Shooting your friend constantly would be straight-up annoying for them. Moreover, the chances are that you’d accidentally hit something precious in your home. Who would want that, right?

Thankfully, targets aren’t that hard to make. You can always use your creativity to make some fun targets that could be used without spending too much money.

Without further ado. Let’s get right into improvising and making your creation into life.

If you’ve never heard of stick bombs, they are held together by tension which makes them fly apart when pressure is put on one of the sticks. This makes stick bombs very interesting as a direct hit from your Nerf Gun will send it flying away!

But how do you make it? You can always collect the sticks after savoring your ice cream. Put them into use by transforming them into stick bombs.

Once that is complete, place the stick bombs against a platform, and you are ready. Feel free to fire your Nerf Blasters onto them. Watch them explode in front of you.

Remember those carnival games where you have to throw a ball into a specific hole to get a prize? You can also make target practicing holes based on that. Make holes of different sizes, big and small, to test out your accuracy.

How to Make: You can find a large piece of cardboard and cut off some holes in it. Next, what you want to do is to highlight the holes with a highlighter or sort.

Set a game where you record your points for each dart you are able to shoot through. You can choose to give rewards as well for the number of points acquired.

Maybe creating DIY targets isn’t much of your thing. You can always get something and perhaps place an object on it. For instance, placing a ping pong ball on a cone is an excellent example as you can try to shoot down the ping pong ball from a distance with your nerf blasters. It would be slightly harder as the ping pong balls are so small and round, that precision is needed! Give yourself some difficulty, train for the best!

One other classic Nerf target is no other than cans. Shooting down cans with guns has been here with us for decades. It also appears to be one of those kinky carnival games which most sharpshooters love to go for.

Cans are really easy to prepare, I mean like really! Surely you’ve drunk a can or two of soft drinks before. Instead of throwing them away, why not save mother earth and put them into use.

However, some people say that cans are a rather dull target as they have weird colors and don’t match the atmosphere while aim practicing. Well, you can always choose to wrap it around with paper and paint over it. Get your creative juices squeezed and make your targets unique.

Another thing about cans is that it is rather heavy, and its volume can be adjusted. Unlike the rest, if you think that your cans are too easy to shoot down, maybe add liquid or sand into your cans. This will increase its weight and make it harder for you to shoot it down as you would need multiple shots.

Maybe you’re a person who is into warfare and just loves to be on the battlefield. One does not necessarily need to be in a war to experience it. Remember those cute little soldiers in “Toy Story”? Using them as targets is not a bad option as well.

In terms of making them a Nerf target, simply placing them on a table will be too boring. You can take an unused cardboard box and cut holes in it. Next, place those little soldiers onto the cardboard holes. You don’t necessarily have to stick the soldiers directly in the hole, be a bit creative, and maybe have some peek their heads out.

If you want something more interesting, you can DIY your soldiers to make them move! Simply connect your little soldiers to a string and attach them to the cardboard. Ask your friend or family members to pull strings from both sides of the box to make the soldiers panic!

But of course, make sure the person pulling the strings is willing to help you that is.

And of course, how can we forget about our precious legos. Legos are one of the most creative ways you can make your Nerf targets, though it may be a bit costly, it is much worth it as it really encourages you to explore your creativity!

As for legos, you can make classic shooting targets with them that will break off once hit. OR you can always choose to make something much larger, for instance maybe a tower. It would be quite interesting to compete with a friend who can knock down their towers first.

As we all know that with lego’s, the possibilities are endless! Nerf target designs can vary in so many unique ways that could change every time. This time it’s classic targets, next are towers, but what next? Explore your creativity as you make the most worthy Nerf Target that can stand in your way!

In a nutshell, the best Nerf Targets don’t a; ways have to be the most expensive. DIY Nerf targets are always a suitable option as they are not only just cheap, but it also enhances our creativity skills in doing it. In reality, there is no BEST Nerf target, but the only one that is suitable for that specific occasion.

Let us know what you think at the comments below. 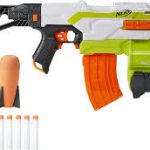 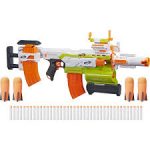