Nerf trademarked in capitals as NERF, is a toy brand name created by Parker Brothers and presently owned by Hasbro. Most of the toys are a range of foam-based weaponry. However, there are also several different types of Nerf toys, such as balls for sports like football, basketball, baseball, and others. The most noteworthy of the toys are the dart weapons which referred to by Hasbro as “blasters”, that shoot ammo made from Nerf foam. 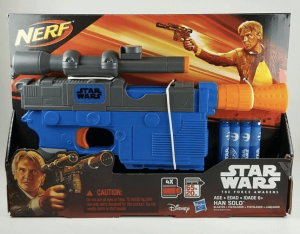 We are going to talk about a set of the Nerf Star Wars blasters, Han Solos and Rey’s. The features of these two blasters are practically identical. These blasters have a four dart internal magazine same as the Nerf Mega Magnus.

Darts are loaded by pulling the leading slide back to expose the internal mag, then load each dart, pushing the rest down, pretty much similar to loading a standard magazine. Pressing the top slide forward then cocks the blaster, and you’re set.

Pulling the slide back then forward enables a dart to load then cocks the blaster each time. On the left side of the blaster is what we are guessing is a jam cleaning button. It’s not mentioned in the manual, but some other blasters have a similar system. Finally, there’s a single tactical rail located beneath the internal magazine. 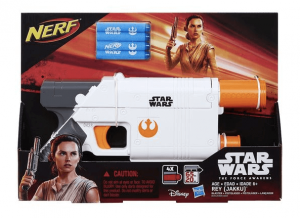 Rey’s blaster has better coloring in our viewpoint, being primarily white, with orange and grey trim. Han Solo’s blaster is an extremely plain looking blue, once again with orange and grey trim. The grey doesn’t work out against the blue, and I’m thinking that this one is heading to the top of my repaint list. We would love to get it looking like the picture on the box, all grimy, dark brown and metal. We’ll see exactly what can be done.

Aside from the coloring, the most apparent distinction is the scope on the top of Han Solo’s blaster. As usual for Nerf scopes, it doesn’t provide any magnification, however, at least it can be seen through, and has a single sight marker at the end.

Unlike the others, though, this one is permanently fixed to the blaster. This would be because of the abovementioned cocking system, as the scope is part of the leading slide. And while it initially may not seem it, the scope makes the Han Solo blaster simpler to cock, as you do not have even to grip the slide, you can just push against it. 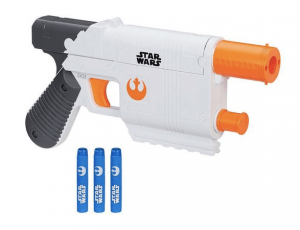 Nerf Rey blaster deal with the same faults of the Han Solo version of these new Hasbro Star Wars blasters. Many notable is that they needed to extend the main blaster body to fit the blaster internals inside. To alter things they would have probably had to eliminate the internal box magazine which would leave these blasters as nothing but another single-shot front loader.

Anyhow, besides the extended length of this blaster, it also has the wrong shape. The blaster in the film is completely sloped and uniquely shaped at the back of the blaster. The Nerf variation looks like a standard handgun with the routine square back. Once again, this was done to integrate the internals of the blaster, in this case, the back of the plunger assembly. With that said, the Nerf Rey blaster does not look too bad. And it’s pretty comfortable to hold. 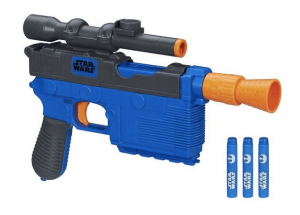 The Nerf Han Solo blaster is a practical prop blaster reproduction based on the DL44 heavy blaster that Han Solo uses in the Star Wars films. It’s not the best choice for a high performing Nerf blaster. However, it just might be the best option for you if you’re a huge Han Solo or Star Wars fan.

The Nerf Han Solo blaster has a 3 round internal box magazine built in. To pack the blaster, you must pull the slide all the way back. Then insert three darts and close the slide by pushing it back forward. You are now primed and all set to shoot, so shoot and let one go!

Firstly, the blaster is smooth and quick, and it’s in fact helped by grabbing the scope and cocking it back that way. Maybe that’s why they felt the have to focus the scope.

Normally, we do not mention the trigger pull because it’s mostly the very same throughout every Nerf blaster, but not on here. The trigger pull is short and feels squishy and sluggish. People dislike it. When it comes to the real efficiency? It is doing not have. It’s not terrible. However it’s plainly subpar, and the blaster carries out noticeably under what the majority of Elite blasters achieve these days.

The appearances of the blaster, while not evaluate accurately, was still extremely similar to the DL44 that Han Solo has wielded all these years. So, it’s a mixed bag of tricks that you’re looking at here. Especially for the price these are choosing, there are better Nerf blasters out there to choose from. However, if you are a big Star Wars fan, there’s nothing else out there quite like this.

The Nerf Rey blaster is about even with the Han Solo blaster regarding function and efficiency. Not dreadful, but also nothing to write home about either. If you loved The Force Awakens, you’re most likely going to wish to make the purchase here; you won’t regret it. Nevertheless, if you’re simply looking for a high carrying out Nerf blaster to require to your next war, there are much better options at lower prices.