Since the launch of Nerf Rebelle Guns in 2013 it has taken the hearts of millions of young girls around the world, setting them into secret spies missions and many fun adventures! 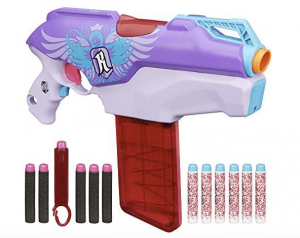 The Rapid Red is a semi-automatic flywheel system blaster. It has the usual tactical rail as well as 2 points for a strap. It also has a cool magazine clip that is red and transparent on its right side. This allows the user to reveal any kind of secret messages that are written on the darts. 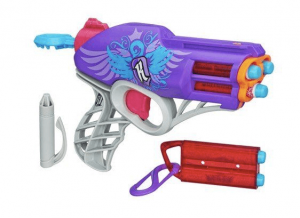 The Rebelle Messenger is among Nerf’s brand-new Rebelle guns when they first launched under the Secrets and Spies range. This special range focuses on sending out secret messages written on the darts. The Messenger has actually turned out to be a success, which is attributed by its identity as “Triadstrike”, that is, basically a Firestrike with the barrel block of a Triad, though clearly in Rebelle trademark colors and style. 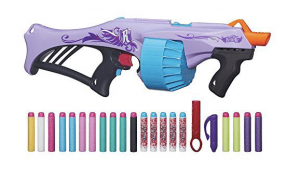 The Nerf Rebelle Fearless Fire Blaster is one of the main heavyweights of the Secrets & Spies line. With the integrated dart drum it supplies room for 20 darts which can be unleashed in under 10 secs, that is if your fingers are quick enough. Included in the package are 15 Rebelle darts as well as 5 Secret darts along with a pen and decoder for secret messages. 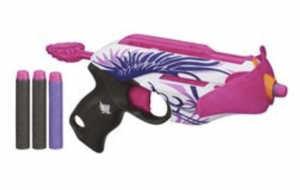 Using the Pink Crush is fairly easy even for young users, similar like all other single shot guns. All you have to do is prime the blaster, insert a dart and fire. The added dart storage on the bow arms does aid in speeding up the reloading process so it fairs well against other Nerf single shot guns. 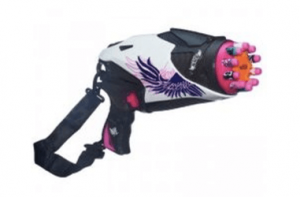 Somewhat a common practice for Nerf guns the Powerbelle is a reshell of the automatic-firing Dart Tag Speedswarm. Using it is quite simple, just hold the trigger, and the electrical motor will do the rest to launch the darts. Nerf claims that this blaster would reach up to 75 feet, which is normal distance you would get with the ELITE range. 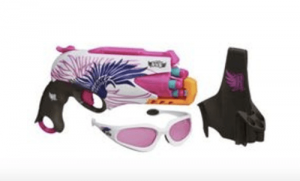 Another strong addition to the Nerf Rebelle guns is the Sweet Revenge, which is a 5 dart revolver with a slim built. This blaster lets you insert 3 darts at once, 4 if you rotate the cylinder right as well as maybe squeeze in a few darts. The cylinder will revolves clockwise on prime. 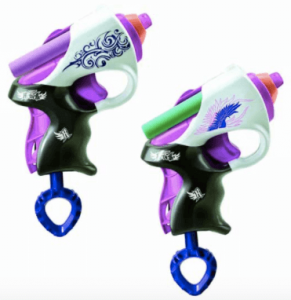 The Sneak Attackers are 2013 Nerf Rebelle guns that can hold up 3 Collectible Darts each. They have a priming system much like that of a Jolt EX-1 as well as a Triad EX-3, however it has a straight plunger system. 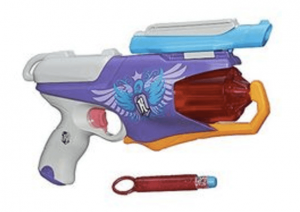 The Spylight is a revolver-like blaster with a six-shot slot, very much like the N-Strike Elite Strongarm. It includes one tactical rail, one point for strap, as well as a concealed, pop-out area in the handle for keeping two darts, which is totally cool. Once more like the Strongarm, it has a priming indicator that can be seen behind the slide, under the sling point. In addition the Spylight also has the Slamfire function. 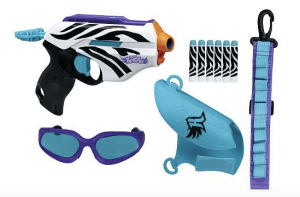 Bush Glam is another single-fire blaster; it is another version of the Pink Crush. It has one tactical rail in addition to the blaster as well as a strap point on the blaster’s handle. The Wild Glam showcases the very same tiny hole just below the muzzle, which enables the user to connect the Pink Crush’s so called bow arms to it. 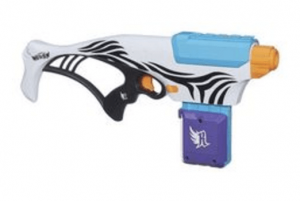 The Rapid Glow showcases the Firefly Tech clip, which charges the darts so they would glow in the dark. It additionally has the standard a tactical rail positioned on the blaster’s priming mechanism, an integrated shoulder stock, and one sling point at the end of the on stock. Because of the placement of the clip well, a clip loaded right into the blaster could also be used as a foregrip.

Camouflaged as a purse, the Secret Shot can swiftly transform into a blaster with the press of a diamond-shaped button. The blaster, suitable for young girls aged 8 and above, has 4 darts. These darts can be stowed away inside when it is closed, so they are always available when going on super secret spy missions. 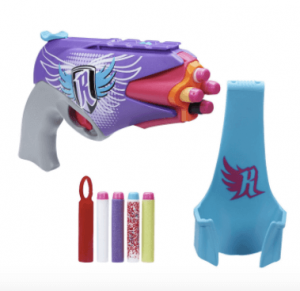 Show your espionage skills and take your shot for the win with the 4victory blaster! The Rebelle FourVictory is a hammer design prime blaster bringing you back to the Wild Wild West. It’s simple to pack this fashionable blaster with 4 darts, after that keep it shut for quick-draw battles in the holster. When it’s time to draw, you could fire all 4 darts at your target without reloading. 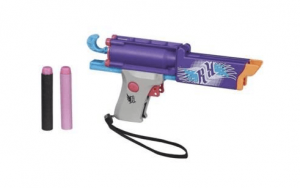 Young secret agents can keep themselves mission-ready all day with the Nerf Rebelle Mini Mischief Blaster! Press the button to expose a stealth-sized blaster. Insert a dart into the chamber and draw back the handle to fire. When the mission is completed, close the blaster to conceal its real identity. 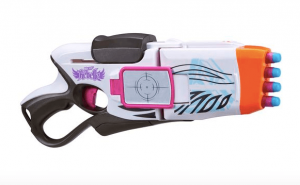 The CornerSight could open to the left or right and also is geared up with mirrors on both sides. This permits the user to look for an angle and also fire without even being seen. This CornerSight blaster includes four darts but you could only shoot one dart each time. Charge the 4 darts, push the slide back and front again and shoot to fire a dart. The blaster has also a storage space for 2 darts. 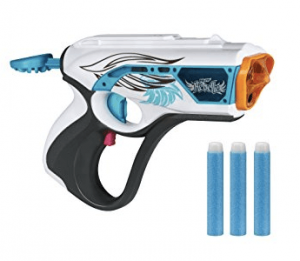 The Nerf Blaster fires darts that have glowing tips Insert the darts right into the barrel then push the switch to trigger a light that charges up the darts. When the darts start to glow, shoot to launch a dart to the air up to a range of 85 feet. This package includes a blaster and 3 glowing darts. The Luminate requires 3 “AAA” batteries to operate, which are not included