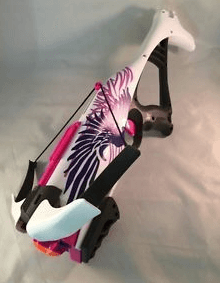 Before you run off to get the Nerf Rebelle Guardian Crossbow there are few things you need to know to see if this gun really suits you or your kids.

The Nerf Rebelle Crossbow line up was developed by Hasbro, wanting to expand their market target to include young girls as well. Introduced in 2013, this crossbow model is a pretty much a reshell of the N-Strike Elite Strongarm, so it is an odd flagship blaster. However, with the awesome design that will certainly appeal well to this segment this crossbow rides well with fans of Narnia and also the Hunger Games franchise movies! This relatively new line up has actually now acquired a great deal of traction over the years and presently is a one of the most popular toys purchased by young girls. It is rejuvenating to see girls that were stereotypically associated with Barbies embrace Nerf crossbows and blasters, which will help lead to some energetic playtime outdoors.

Setting up the Crossbow is a no brainer with the instructions especially for a seasoned Nerf lover! However, it requires firm hand and after a few insertions and clicks you are set to go! 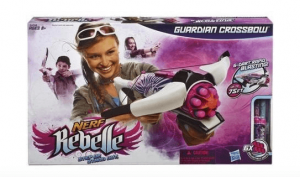 The Guardian isn’t actually a crossbow. It’s generally a pump-action Nerf shotgun with some aesthetic crossbow aspects stacked on top.

The white with pink and purple streamlines most definitely a rejuvenating sight compared with the standard orange and blue design of Nerf blasters. The ergonomics on the blaster are also nice! My hand quickly fits on the grasp with some area to spare, and also my fingers fit in the grooves well. The stock braces nicely against your shoulder as well as the trigger rests easily in your grip, unless you are a guy with big hands then it will be a bit awkward. The grasp is absolutely molded for a smaller sized hand, which would be perfect for young girls!

The 6 collectible darts have awesome colorful designs too. Girls will absolutely adore the colorful darts of pink, purple, white and green. These darts have cool design on them too. You do not have to fret about these darts mixing with the standard boy’s blue darts. Anyway, you would be able to use the blue darts on your blaster too if you want. It would be awesome if you could get packs of the design you love as opposed to just a mixed selection. You probably could get a 30 darts pack for $9.99 if you’re serious about kicking butt or too lazy to pickup darts.

The Guardian isn’t the world’s most solid built gun and the top of the crossbow aspect fell off sometimes, although it was very easy to place it back on. The basic mechanism, however, appeared sturdy enough. 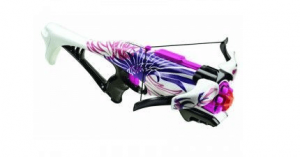 To get into action with this blaster is practically very easy and basic. To refill the Guardian Crossbow, put in six darts right into the muzzle of the blaster followed by pumping of the blaster to prime it. Pull the trigger to fire a dart. This is not a motorized model so you need to pump it once per shot. After firing the barrel rotates instantly into placement to fire the following dart. With the auto-rotating launcher that holds all 6 collectible darts, you can fire the darts one a time or blast all 6 in a quick stream using the Slamfire mode.

Performance of the Nerf Rebelle Guardian 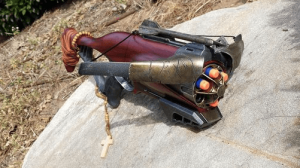 The Crossbow advertises ranges of up to 75 feet. However, many have reported this is hardly the case. Usually most users would be able to hit about 45 feet on average. Tilting it up about 30 degrees could give you more distance about 60 to 65 feet, which is still lower than what is claimed. Even though this is a slightly better range compared to what you would get with the Strongarm model, Hasbro could have done better considering that this is a reshell model. Fortunately, the Slamfire functions well on this model without encountering much of a problem like jamming darts or locking. To activate Slamfire mode just hold the trigger down and slide it backward and forward till all six darts are released to your target.

The laser sight provides any person at close range at night with deadly precision. When it is bright outside you have to make use of the flip up sight or using the naked eye. They both offer you with the exact same accuracy as the laser view, but when you are moving further away the accuracy substantially decline so you need to make compensation to your aim.

Nothing to shout about in terms of performance among Nerf blasters but for the targeted young girls they will certainly enjoy the role-playing, setting up targets as well as saving the day with this crossbow. Exploring the mystery of “Narnia” with one of this cool crossbow will certainly be an unforgetable adventure! So this would certainly be cool to obtain for your daughter also as opposed to having her using one of her brother’s typical boy gun!