The Nerf Rebelle Codebreaker Crossbow is an awesome and also special design, one of the many cool models since the birth of Nerf Rebelle product line in 2013. Hasbro spent more than 3 years finding out what young girls could desire in a blaster by asking this targeted segment themselves. This was perfect with the rise of pop-culture heroines like Katniss Everdeen and Princess Meridas as it was an instant hit till today. 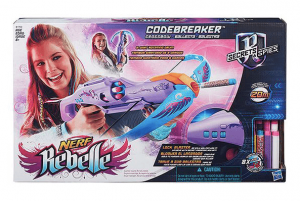 Design and Layout of the Rebelle Codebreaker

The Nerf Rebelle Codebreaker Crossbow Blaster is really easy to put together. You have 3 parts you need to assemble; the bow front, the string, and the shoulder rest. Every one of these products quickly clip into each other with a resounding click! It is simple setting up of this crossbow done within a couple of minutes, seconds even if you are familiar with Nerf or similar products.

Visually the Codebreaker is a fascinating blaster, with the normal streamlined Rebelle design of purple and grey. This color combination truly works well for this crossbow blaster rather than painting these guns pink and placing them in pretty packaging. In terms of design one huge setback is they left one side empty, which is fairly disappointing, particularly as the Rebelle styling tends to not have any engraved details.

Remarkably, the Codebreaker really feels extremely thin and light. Also, since the Codebreaker is a pump-action crossbow, and unlike its stock and handle, the pump grip is well sized and quite easy to grip. 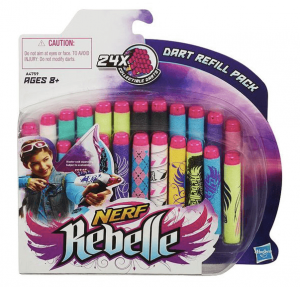 This eight dart front load capacity crossbow features passcode protection that girls could be set-up for added spy security, making sure just the user or trusted allies can release its power. The CODEBREAKER Crossbow includes one “Secret Message” dart, 7 darts, as well as a different decoder. Just one dart has a message on it, that dart is speckled with red dots, so you know which one to decode. There is likewise an alternative on the crossbow to place in a special code so only the person that recognizes the code can utilize the crossbow.

This blaster also has a tactical rail that you could add on accessories like scope but this serves more aesthetically to make it cooler rather than improving the performance.

The Nerf Rebelle Codebreaker Crossbow has a revolving barrel that holds 8 darts. It is convenient that you could slot in 4 darts at once from the opening before turning the barrel to fill the rest of the darts. After loading the foam darts right into the front-loading barrel, prime the slide backward and forward to set the crossbow and fire to launch all 8 darts straight without refilling. During this action barrel mechanism will rotate.

Filling this crossbow with some old elite (non-rebelle) darts, together with some off-brand suction/clip system darts may not work. To start with these off-brand darts really did not rather get to as far back in the cyndrical tube as the rebelle darts, in spite of being positioned as far back as they can go. As a result, the bow would cock and also move the dart into placement, yet you would not be able to release the trigger. There is probably a locking mechanism in the blaster that stops it from shooting if a dart is not detected.

Performance of the Nerf Codebreaker 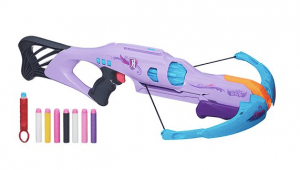 With about 30 degrees raised angle you could achieve a typical dart velocity of 40 to 60 feet-per-second given by the creative, flexible crossbow string. However, the Codebreaker is not truly up there with the Elite range and falls short of what is claimed on the packaging.

Although this blaster does not possess the slam-fire function, the Codebreaker does fire off darts rather quickly, with the only down-side being that it won’t take long to shoot through all 8 darts. This will be a downside in battles against blasters possessing 12 darts clip. Nonetheless, priming and also shooting is rather smooth and not much problem with jamming darts so this would certainly be a great weapon to utilize for fights.

Apart from that the secret code functions well if you want it to safeguard from unintended firing by young toddlers around your house or your irritating little sibling! Nevertheless, for Nerf battles this feature does not really serve much purpose.

If you are into visualizing some secret mission spy games then this would certainly be the perfect blaster for you with its special secret code! However, for those that are looking at performance this is simply an average efficiency crossbow blaster for battles. Nevertheless with its easy handling, smooth priming and also reloading efficiency one could mod this blaster to put it right into an incredible fight worthy weapon.