Released in 2009, the Nerf Raider CS-35 has the biggest dart capacity of any kind of N-Strike blaster, holding a massive thirty-five darts in its drum. It could also hold an additional dart in its handle, making it thirty-six darts. In 2014, Hasbro launched an updated version and also was named as N-Strike Elite Rampage. 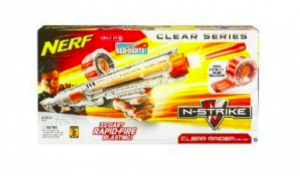 Design and Layout Of Nerf CS-35

It looks something like a Tommy gun that you would see from an old Mafia mob flick. Its standard colors comes in the typical dark blue and orange, although there are 2 other versions launched as well; Clear Series (clear plastic as well as orange) as well as Get ready (orange and black). The gun includes a removable stock that is compatible with other compatible N-Strike guns such as the Recon or Longshot. It also has the tactical rail grooves on top of the gun for you to fit with scopes and other compatible N-Strike add ons to give it a cool look. This model also comes with 2 hand grips, one for the trigger as well as one for cocking the gun. 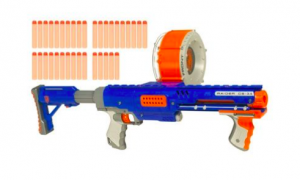 The Raider CS-35 is a reverse plunger, clip system blaster. It is the first of nerf N-Strike guns to be geared up with a Slamfire function, where you could hold down the trigger and pump the blaster to fire the darts continuously.

The Raider does not utilize any type of batteries; you essentially have to pump and also shoot for every shot, or as mentioned use the Slamfire mode for multiple shots. This additionally makes the Raider one of the quietest Nerf guns you could use, as other Nerf guns with large size clips can have the loud pumping or batteries to power up humming motors like the CS-12. This makes the Raider a perfect gun for creeping up on your enemies, which is a winner for those indoor Nerf battles. On the side opposite the drum, there is an orange jam door that permits users to get rid of jammed darts.

The 35 drum is probably the strongest feature drawing of the Raider, giving it a strong edge in any Nerf battle. As it is a CS drum, it works with all other CS/ECS blasters such as the Stampede and also Recon. It’s capacity is two times that of the next biggest drum/clip, which would only hold 18 darts. This gun is also 10 more than its nearest competitor, the Vulcan’s 25 dart belt. 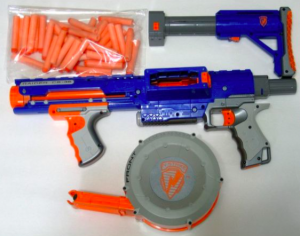 Loading the drum clip is fairly simple much like a normal 6 dart clip but having an optimum capacity of 35 darts makes the loading procedure a lengthy process. Nevertheless what is awesome is that this gun could get rate of fire of up to 2 to 3 shots each second!

The gun itself appears extremely solid, very easy to move with as well as to fire, presuming that you utilize the CS-6 clips. It is basicly similar to the Recon but seems to jam much less.

Priming the Raider is similar to an AT, yet utilizes a foregrip as opposed to a shotgun style pump grip. This could take some getting usage to, but thankfully the foregrip is exceptionally comfy. The only issue people have actually observed with the Raider is that if you don’t work the pump all the way, you’ll wind up jamming the gun. When that happens the dart will usually fold up or get damaged. This issue, however, vanishes with some practice.

Raider sacrifices distance for its rapid shooting ability. The Raider’s ordinary firing range is approximately 25 to 30 feet, close to the distance achieved with a stock Longshot or Recon. With its reverse plunger system, it could not fire as far as the direct plunger guns such as the Longshot CS-6 or even a Nite Finder EX-3. This is the same reason why the Longstrike has much less variety compared to a Longshot. If you modify or play competitively, this is an important element to consider.

For those who prefer meaningless shooting over tactics, the Nerf N-Strike Raider Rapid Fire would wreck some fear with their opponents with its capacity to hold 35 darts and also a clear window in order to help you inspect if your ammo is enough. This gun’s lightweight and ease of use make it a good primary weapon selection.