For those that are big fans of the classic computer game Doom the Nerf Barrel Break IX-2 will certainly give experience on those wonderful moments for you. This model was the first shotgun that was introduced in the Nerf line up. It includes 10 Whistler foam darts and an unique tactical rail mounted Ammunition holder. The Barrel Break works with most Nerf foam darts as well as tactical rail accessories.

This blaster was launched in 2010, along with the Alpha Trooper CS-18 as well as the Spectre REV-5. It was relaunched in 2013 with a N-Strike Elite blue color design; this time without the tactical ammo storage piece and also improved the smoothness when you break the barrel open to reload. The range is also somewhat further by a couple of feet. Another makeover version was again released in 2014 and the gun was renamed Sonic Fire Barrel Break IX-2 with a red color scheme. 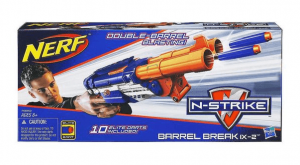 It simply looks so cool resembling a sawn-off dual barrel shotgun. Definitely special as Nerf did not make many shotgun models. The detailing on the gun looks awesome as well. As mentioned there are 3 colors that came out along the years for this model; yellow, blue and red. Personally the yellow body stands out even more to me as compared to the other two and even more when you put it with your other Nerf blasters that you have in your collection.

Features of the Nerf BB IX-2

Since it is a reverse plunger system the shooting distance typically is not that great. However, you should be able to strike somebody from about 20-30 feet away.

The Barrel Break showcases a two-step trigger, permitting it to fire one barrel at a time or both barrels at the same time. You might also notice that the left barrel fires first. This is the most unique function of the gun that actually makes it different from the other Nerf guns. It is just so much enjoyable and also cool when you are reloading this gun.

The Barrel Break additionally comes with the N-Strike tactical rails to enable you to affix other N-Strike accessories, although it’s REALLY intended to be for putting your spare rounds for firing. You could constantly attach the ammunition rail on TOP of your device. The ammo rail is good for guns with lower capability since you could refill faster and much easier. This rail can hold up to 8 darts any time and works well with the Barrel Break due to the fact that you can only load two darts each time. 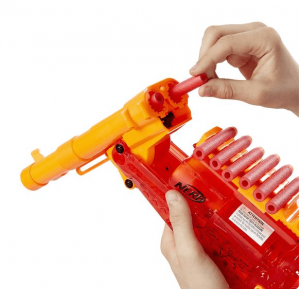 The Barrel Break (BB) uses a one of a kind loading/priming feature unlike other Nerf guns. Pressing the switch at the handle near the trigger allows you to draw open and also “break” the blaster to load your darts. Once the foam darts are inserted into the opened barrels to load and the barrels returns to its original position, the blaster is ready to fire. This loading approach could be a little bit tricky for younger kids, but after some practice they should be used to it.

If you are looking for good range and fast reloading, this is not the blaster for you. It’s more for close proximity battles, and as a secondary weapon.

However, throughout testing, there is very few issues with jamming, which is great. Some users do experience a few jamming problems but it should be rare if you are used to its reloading mechanism. One cool feature is that you can fire the darts separately, or both at the same time. If you pull the trigger only half one dart is released from the barrel. If you pull the trigger completely with the other dart will fire. Pulling the trigger all the way will launched both darts simultaneously. 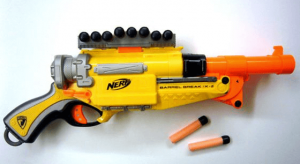 The blue Elite version of the BB also works fine. At least the Elite darts work well with the BB’s packing mechanism minimizing the previous jams caused by these darts. With this version the darts loads much better into each chamber, as the tips of the old N-strike darts tended to capture and snag the edges if re-loading swiftly. The distance the darts could reach is still the same at 15 to 20 feet but again for close ranged battles this is sufficient.

If you are not particular with the distance or just seeking a side claster for your Nerf battles the Nerf Barrel Break IX-2 is a truly fun gun to use. Especially for the younger kids the darts do not shoot too hard to cause any harm even at close range. Nevertheless for older kids the cool loading feature is absolutely great setting it apart in your Nerf arsenal.