The Nerf Alpha Trooper CS-12 or also known as Elite Alpha Trooper (EAT), is one of one of the most sought after guns in the Nerf line up. The original CS-18 Alpha Trooper was fairly a success with Nerf enthusiasts everywhere and modders. The CS-12 inherited many good features from older versions to earn it a one-of-a-kind blaster. It has the exceptional ergonomic designs and balance of the Retaliator, the infernal firing pace of the Rampage, all with the power of the Elite system.

At first glimpse package box visual is pretty much the same as the initial Alpha Trooper. It is still the exact same looking kid holding the blaster, however the marvels of Illustrator/Photoshop have a few modifications to showcase the new blaster. It’s now called the Alpha Trooper CS-12, not CS-18 so the artwork has been edited to show a 12 round Elite clip instead of the initial 18 round drum. Logo designs are now “N-Strike Elite” as well as the blaster currently sports the brand-new Elite color scheme. The gun is also firing an Elite dart rather than an orange normal dart. 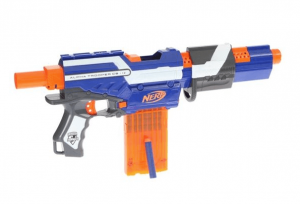 The reverse plunger system that was used previously on the CS-18 is currently gone and replaced with a direct plunger system, which is great news! This ensures that the accuracy as well as distance of the darts is given a boost as compared to the previous Alpha Trooper. This model also still includes slam-fire, which brings its shooting rate up to par with semi-automatic guns.

Using the Elite Alpha Trooper is identical to the previous version. Pull the handle back, load the magazine, push forward and you are ready to fire. Slam-fire feature naturally functions similar like the previous model. Just continue to hold the trigger down while pumping back and forth continuously.

The priming on the Alpha Trooper is also nice and simple. The grasp on the blaster is a good feel for the user as well as the trigger size is perfect.

Actually the reason this replacement design is called a CS-12 is because they have replaced the initial 18 round drum with a 12 round magazine. Some may see this as a downgrade especially during the heat of a battle but with easy replacement of additional clips it should not a significant difference to most customers. The look of the AT with flat clips over the drums may appeal to some anyway.

On top of this, this particular model also features a stock add-on point, a tiny tactical rail behind the jam door, as well as a tiny iron sight on the top of the priming handle with. The clip removal button is present on both the sides of the blaster, which is excellent during change in a battle.

One huge difference of this replacement model is the missing shoulder. Although there is a designated Clipper to affix, nevertheless, one have to get the shoulder strap. Without the shoulder strap, the N-Strike Elite Alpha looks something like an Uzi, which is cool. Much less recognizable change is the better grip design with finger joints.

The clip that comes with the Nerf Alpha Trooper could hold 12 Elite darts. The clip is see through and that is awesome looking and useful to check the amount of darts left inside before reloading. Also, similar to the previous model, the EAT has a dart stowed away at the bottom of the handle for that last resource shot. You probably won’t really need it unless during really long battles where every bullet counts. 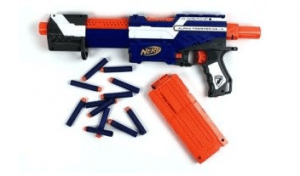 The rate of fire of at least 3 darts each secondly has to be one of the most important feature for this gun. This kind of rate of fire is insane. Some are saying if the semi-auto like a Stryfe could hold up against it. This will help make it a clear winner during the heat of a battle, which is why it is a sweetheart blaster for so many Nerf followers who loved the initial N-Strike Alpha Trooper.

In terms of performance, this gun is among the most effective blasters out there. The distance of 75 feet is accomplished when the blaster is angled, however it normally hits a range of 60 to 65 feet.

Another winning point is that this blaster remarkably does not so often, and the majority of jams are due to human error. The Alpha Trooper has concerns when users press the Slamfire too fast or too hard. Slam fire also reduces the accuracy of the shot. In addition, one concern is that the range on the Alpha Trooper starts to reduce after too much regular Slam Firing.

The Alpha Trooper is thought about as an exceptional blaster on the whole, as a result of its outstanding firepower, long distance and a great ammunition ability. It is widely considered an all around blaster. You will certainly most certainly not be let down with this purchase as the value you get makes it all more than worth it.