Over the years, Nerf has consistently improved the effective firing range of every series with new releases of lineups from the N-Strike Elite series in 2011 to the Ultra series released in 2019. The extension in firing range is the result of consumers wanting more power which equals more fun when they are playing around with the foam blasters in which Nerf answers appropriately. The Nerf Rival series was released in the fall of 2015. The RIVAL series is designed for Nerfers aged 14 and up, as it features high-performance “100 FPS” blasters for “competitive team-based play.”

Most RIVAL blasters are either magazine-fed or use hoppers, with notable exceptions, such as Artemis XVII-3000 or Kronos XVIII-500. The RIVAL blasters also feature a tactical rail that is very different from the standard tactical rail. Each blaster is equipped with a mechanical safety device that must be disconnected before the blaster acceleration trigger or trigger can be drawn.

All products released in the series are released under two color schemes: red and blue. However, for an unknown reason, newer blasters have only been released in red and blue since 2020. The number of red and blue blasters announced and produced so far remains the same. However, the question of how far do nerf rival guns shoot is an answer that must be answered to satisfy potential buyers or owners who wish to learn more.

The Rival Apollo XV-700 is the first of the Rival series to be released which was way back in 2015. The Nerf Apollo is a nerf brand blaster made from Hasbro but it doesn’t shoot the typical Nerf foam darts, it uses the High-Impact Rounds (HIRs) as its ammunition. Included inside the packaging are the blaster, a magazine, the instructions, and a few HIR rounds.

Up in the front, the cool orange muzzle does look neat, but it is not an N-Strike attachment point. Up top, there’s a cool tactical rail however it is not a traditional N-Strike tactical rail, it looks more like a weaver rail that will fit Nerf attachments but not in the traditional sliding way, it has to be clipped over from above and it will hold. Behind the rail is where the priming handle is located. In order to prime the blaster, pull back the handle and push forward.

The weight of the primer is quite substantial and takes a bit of force to pull it back and because of the distance of where the priming handle is and where the actual location of the blaster handle is, the blaster tends to pivot and fall behind. Nerf players who are above 11 years old might have a challenging time to reprime the blaster and it is not the muscle that is required to prime it, but the factor of the location of the handles also comes in conjunction together.

For a more current Rival blaster, The Finisher XX-700 is a Nerf blaster that was launched in the RIVAL series in the fall of 2020. The Rival Finisher was a fascinating addition to the Hasbro Toy Fair. A mag-fed Rival gun for just $15, with a new kind of magazine? It is a fascinating contrast to the current staple of the Rival series, the Kronos. The magazine itself is not as innovative as one would have hoped, but the blaster (while rather simple in nature) is a decent addition to the cheaper end of the Rival line. For $15, the Finisher offers a simple pistol-type platform to the customer. And I mean, simple. There’s a lot less info and a lot less plastic on this blaster than on, say, Kronos or Apollo.

The plunger tube is exposed to orange on the sides, the priming slide is short, though adequate and grippy, the paint is gone, and many items inside are simplified. That’s not to say all this is bad; the Rival blaster is so tall, and it’s good at this price. It’s just a note that Hasbro has, in this case, put less stock in shape and concentrated on features. (And some people prefer “functional” aesthetics)

Of course, the blaster is a little less convenient to use than the Kronos. This is evident in the grip and trigger; the contours of the hand are gone, while the trigger has a smooth surface and a hard pull. Small use, you’re not going to mind a lot. Extended use of war or humans v zombies, a case, however, may be a matter of concern in that regard. Performance-wise, The Finisher averaged 91fps over 80 rounds, with the regular Nerf Rival ammunition, just above 90fps on the box. Firing hard, you can do about two shots a second though it cannot consecutively fire due to the mechanism. The effective range of the Finisher is approximately 25 meters while firing at someone 10 meters away is a hit or miss already because of the aerodynamics of the HIR rounds.

To conclude, the Nerf Rival line mostly has an excellent firing range because of the older target audience which enables Nerf to produce more powerful blasters which in return results in farther distances of firing. 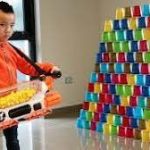 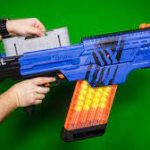 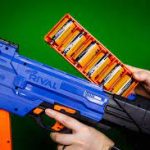