If you are wondering which big Nerf guns that will make you God at the battle field or make the best defense for your base that is impossible to penetrate well you have come to the right place. 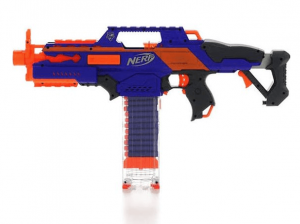 It is certainly one of one of the most powerful gun to get hold of because it shoots 4 darts a second! On top of that it has actually a built in scope and it can take ammunition clips making it simple to reload. This gun is also fantastic as it’s exceptionally reliable and shoots great range.

This gun is the ideal choice for frontal assault in a Nerf war. Besides the loud noise from the motor as it is firing there isn’t really not many disadvantages to think off. The rate of fire is simply a winner plus it is a really comfortable gun to use as it is not too heavy and the stock can be modified. Another plus point is that it has several rails that you could use to place a personalized light as well as laser on.

One problem though would be the batteries running low in the heat of a Nerf battle. Overall if you are looking for a power-packed gun for Nerf wars this comes highly recommended. 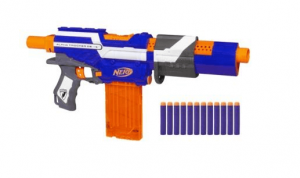 Brilliant gun similar like its predecessor this is a replacement model for the CS-18. With slam fire this gun rules and can fire faster than any other gun in good hands. It is easy to modify with simple internals and kits easily available. The Elite Alpha Trooper is a lightweight, straightforward killing machine.

It has reliable bang fire, which allows it to fire as fast as an unmodded machine gun, and doesn’t require spinning up any flywheels. It’s also precise, has good shooting distance, and never jams. This model’s 12-dart clip is enough to spread fear to your opponents. It’s sad nonetheless that this model is difficult to find now. 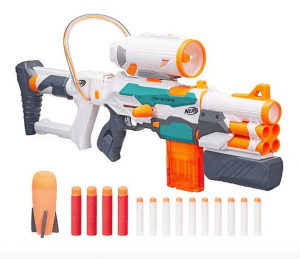 Another powerhouse in the Nerf align is the Nerf Modulus Tri Strike. This thing’s not only has impressive looks and firepower, you can add many add on attachments to customize your gun. Thanks to this modular setup, you can pull apart this gun into various modes to fit the battle situation. This is where, in addition to the main, 10-round gun, a further four pump-action mega darts can be strapped to the front. A top mounted Nerf missile is also possible based on your creativity. 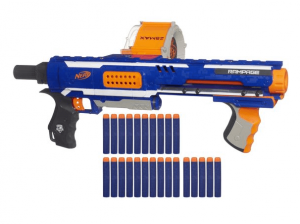 The Nerf N-Strike Elite Rampage is the upgrade version of the Raider CS-35 and one of the favourite among Nerf enthusiasts. Although its drum has been reduced from 35 darts to 25 darts capacity, Hasbro have made other great improvements to compensate. It’s a power packed model and the user can fire darts from Nerf N-Strike Elite Rampage Blaster in two settings, the Single Fire mode and the powerful Slam-Fire mode. 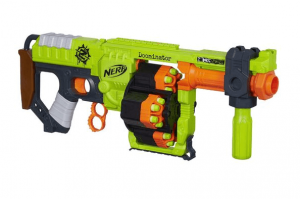 The Doominator Blaster is a fun model to play with. It has this cool cock n’ load mechanism on the front where you use a handle that sticks out from the gun. You could choose to assemble this handle either on the left, right, or base of the gun. What’s cool is that you see how the gun rotates to the other drum once you’ve emptied the darts. In addition this gun also the awesome Slam Fire function, so you can hold back the trigger and also use the primer to fire. It’s just enjoyable to use. 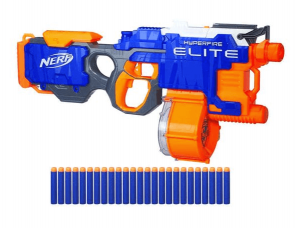 The Nerf N-Strike Elite Hyperfire Blaster is one of the most powerful and fastest Nerf guns on the market today. Its incredible firepower enables it to shoot up to 5 darts per second. In addition, this brand-new Nerf gun boasts a 25-dart drum. This drum allows you to shoot more darts at once than do many other Nerf guns. At the same time, this large Nerf weapon is designed for ease of use by both kids and adults. The placement as well as size of the trigger, handle, as well as various other pieces gain is just simply brilliant! 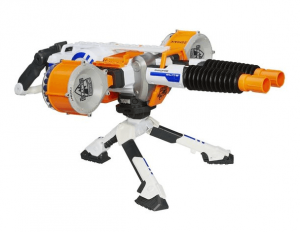 The Elite Rhino-Fire Blaster might be one of the more costly Nerf guns, but it’s one powerful and heavy-duty arsenal. It makes use of 2 of the Rampage drums, each holding 25 darts. There’s no on switch, and also you just press the tail end of the blaster to fire. The barrels motions in and out as you fire, and could shoot as far as 80 feet. The only issue is that accuracy is rather poor for this gun but if have a bunch of opponents coming at you at one time then this could prove to be a useful defense. 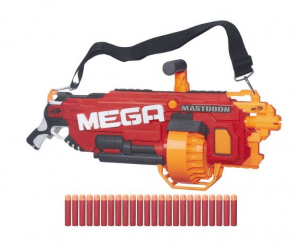 This new Nerf gun stands out from other Nerf guns on the market because it is the first Nerf blaster to be fully motorized. With the addition of 6 D batteries, you can get this gun to automatically fire all 24 darts in the span of about 20 seconds. This overwhelming firepower, as reported by users, makes it a challenging force on the Nerf battleground and also an exceptional choice for protecting yourself from strikes by your opponents.

Speed combines with distance in the Mega Mastodon. The whistling darts, which are really cool as they zoom past your ear to create a real battle feel. This powerful gun can shoot up to 100 feet to unprepared opponents. 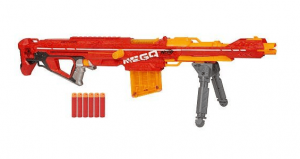 The N-Strike Elite Centurion Mega Blaster is for those that take their warfare extra serious. The enormous gun truly lives up to its name. It could be frustrating for some youngsters with smaller sized hands because of its large dimension. It shoots the mega rounds like the rest of the Nerf mega guns, and it has a quite nice shooting distance up to 50 feet. 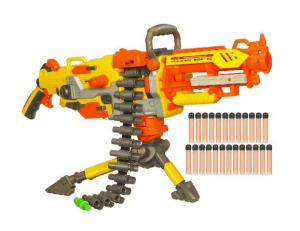 This model is a fast loading gun that holds 25 darts and also it can load up really quick. It’s a semi-automatic gun but isn’t one of the most accurate gun in the Nerf line up. While it requires batteries to use to full impact, you can still use the pump activity to fire the gun if the batteries die, which is awesome. While not the finest gun for frontline assault, it’s an excellent gun to provide cover for your teammates with its large clip capacity. The only setback is that this gun jams easily.